Buy at trAce label or at Bandcamp 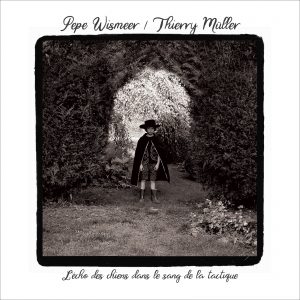 This album is the fruit of ​​a collaboration following the meeting between Pepe Wismeer and Thierry Müller (ilitch, Ruth …) a few years ago.
Recorded between April and November 2019, the first CD (12 tracks) is unsettling by its irresistible beauty and its ambiguous melancholy mixing heady reverie and experimental dark psyche delirium.
The second CD “No Re Re Night Fever – volume 7” (43 mn) is the quintessence of three nights of improvisation performed without re-recording in August 2019.

Kaleidoscope mastered by sparse and vast influences, the very personal universe of Pepe Wismeer – duo living in the Ardennes led by Anne-Laure Therme and Damien Van Lede – has been handling the purity, the delicacy, the minimalism since 1999 in about twenty albums, all relatively unclassifiable and deep, on the borders of experimental, industrial, dark-folk and ambient. In their icy or hot universe where a subtle mixture of anguish and melancholy crouches, emerging from a multitude of organic and analog sounds, the languid voice, the piano and the sometimes epic effects breathe melodies and frames of a irresistible beauty. Nurse With Wound was right, choosing them for its compilation of versions of Two Shaves And A Shine.

Thierry Müller is a multi-instrumentalist composer, whose Ilitch and Ruth projects are recognized in the international independent and underground scene. Since 1978, his albums with multiple and unclassifiable universes have been erected as “Cult” by personalities like Tim Gane, Lee Ranaldo, Steven Stapleton, Edward Ka-Spell, …). He collaborated on albums or Live with, among others, Valentina Fanigliulo (Mushy, Phantom Love), Nick Littlemore (Empire Of The Sun, Pnau), Aaron Moore (Volcano The Bear,…), Quentin Rollet, Jac Berrocal, NowCut …