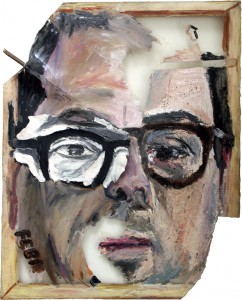 Like other 1970s European electronic rock artists from Heldon to Conrad Schnitzer, Ilitch owes more to the avant-garde experiments of Stockhausen and Xenakis than to the rock and roll of Chuck Berry or even the Beatles… Ilitch came out of France, was the work of mostly one person, Thierry Müller, using unconventional guitars as well as keyboards and other electronics to create strange textures and sounds. Müller was a photographer and graphic artist from Paris who started making recordings in the early 1970s using prepared guitars, harmonium, and even using the tape recorder as another instrument. Initially he worked completely solo but by late 1975 he was being helped by Ruth Ellyeri. In 1976 his brother Patrick Müller on EMS synthisizer and treated guitar joined Ilitch, for a live performance at the Café La Manille, in Paris, and the duo also played there the following two years as well. In October and November of that year, Ilitch recorded the material for the LP « Periodikmindtrouble », but by the time the LP was released, in 1978, the original second side was scrapped for other more recent material. This album featured abstract music that was completely instrumental and with a heavy use of electronics. Though this is considered the first Ilitch LP, in fact a year earlier Müller released « Portraits » in an extremely limited edition of one with hand painted cover. By 1980 Ellyeri, on guitars, vocals and electronics, became more integral to the Ilitch sound, and Müller occasionally added in synth player Philippe Doray (Associaux Associés) and saxophonist Patrick Dubot (Associaux Associés) into Ilitch as well. They released a second LP, « 10 Suicides » that year, a more varied album that included some heavily processed vocals as well as a sixteen page booklet with many of Müller’s photo-collages. The same year under the Ilitch name was released the cassette « PTM Works » (Patrick and Thierry Müller’s works) on Eurock label, as well as the one-sided EP « Culture », which was credited to him and the graphic designer Edouard Nono. After this Müller took a break from music for a couple years, but in 1982 he began work on a new project. The project eventually became the group Ruth (though Ruth Ellyeri wasn’t a part of it), as Müller began collaborating with many more musicians for recordings done in 1984 and 1985. Ruth’s music was far more polished and accessible, adding a quirky new wave twist to Müller’s textured guitar and synth treatments. The Ruth LP « Polaroid/Romans/Photos » came out in 1985 with a 12-page booklet. That same year, thierry Müller and Philippe Doray worked on the « Crash » project (some concerts in France and Europe) and released an EP called « Pile ou Face ».

Müller stopped making records and devote more time to graphic arts after the Ruth album (labels and distributors were not at the « rendez-vous ! »), though he did release three more extremely limited recordings, « D. Prune Tributes » Volumes 1 through 3 (a « hommage » to painters and musiciens), under his own name between 1989 and 1991. Though his records had limited releases and have long been out of print. In 2000-2001, much of his music has been made available on CD by the Fractal records label with Bonus tracks.

2004. It has been 24 years since Ilitch’s previous solo album. Following the critical acclaim of Fractal’s reissue of his two solo LPs (and his 1985 project Ruth), Thierry Müller (Ilitch’s mastermind) went back to work and, five years later, gave birth to « Hors Temps/Out of Time », a satisfying – if slightly outstretched – slab of electropop truly out of time. Ilitch tackles modern technology with talent, but his music still relies on elements taken from the heydays of Krautrock and Cold Wave, along with a special something that recalls The Legendary Pink Dots or Nurse With Wound. Electronics hold a key place in the arrangements, but Ilitch also put electric guitar, drums and samples to good use, creating stimulating sound environments that don’t get in the way of his simple intellectual songs. His main collaborators are percussionist Hervé Zénouda, guitarist Laurent Saïet and keyboardist Guillaume Loizillon music-wise, engineer Patrick Müller recording-wise, and poet Phillipe Doray lyrics-wise. « Hors Temps/Out of Time » is a sharp, relevant, bold, and downright good opus.

In 2005 was released « Rainy House » (a limited edition of 250 Picture Disc LP+CD). « Rainy House » collects Ilitch material recorded from the late ‘70s + bonus tracks, although many of the older pieces were tweaked, modified and remixed along the way. The first six tracks on Rainy House are the six parts of the haunting minimalist suite « Chambre », a stark, introspective piece performed on an old, slightly detuned piano, accented with sonic filters, fuzz and studio treatments. Comparable at times to some of Battiato’s late ‘70s minimalist work, this actually develops a lot more variation throughout its duration and is thus far more interesting. The remaining two cuts (only on the CD) seem to be of more recent vintage, the first « Désuet » (1987) a 15 minute workout of swirling experimental sounds and textures, a piece wrote for a performance of the poet-performer Julien Blaine (voice, kazoo, and Jew’s harp). The final track (2003) features several tracks of sounds coming from a skipping CD mixed together at various intervals. « Rainy House » embodies the more experimental side of Ilitch’s work.

Spring 2006. Meeting and beginning of a collaboration with Nicholas Littlemore (Teenager, Pnau, Empire of the Sun …)

January 2007. « Lena’s life & other stories », Ilitch 5th album and suite album to « 10 Suicides » (1980). It shows he has lost none of his creative juices and remains one of the most unique artists in France and Europe today. The music is a suite of shorter tracks that conceptually blends into a soundscape of electronic-screaming melodies filled with trippy guitar treatments and oblique pulsations. In conception and execution it’s a masterpiece of experimental progressive poprocks. This album include collaborations with Nicholas Littlemore (Teenager, Pnau) and featuring Mami Chan, Patrick Müller, Roco, Laurent Saët and Franckie del Tango. 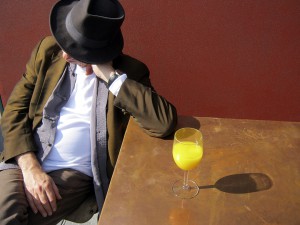 Winter 2009. Thierry has begun to work on an album project with Aaron Moore (Vulcano the bear, Curtis/Moore, etc.).
First recording session with Mushy and Lou Chano for a new Ruth album.

Winter 2011. Working with Nicholas Littlemore on the edit of a release with selected tracks from 2006 to 2011.

Autumn 2012. Release of Ruth featuring Mushy « Far from Paradise » and  Moore/Müller « Today is yesterday’s tomorrow » on three:four records.
The album with Quentin Rollet is mixing.